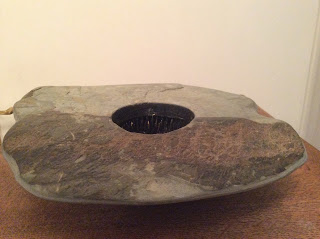 Tuesday’s blog rolls back the hours, so I thought we might take a little trip down Memory Lane again…
Back in the 90’s, stamping really wasn’t as popular a pastime as it is now. I would like to think that we have played a part in P for Promoting it!
But back then, it was hard to make an all-year living from our stamps, so we had to come up with something else to supplement our income during the summer months.
We developed a really beautiful slate vase. Yes, that’s right! Nothing to do with stamps! But everything to do with flowers.
Running parallel with our stamps the whole time, right up until 2 years ago, we also made fantastic slates vases.
Here’s one of the Tavistock pieces with a 2.5″ pinholder.

Our vases were really clever. They were beautifully hand-crafted slate pieces, all hand-made. Underneath was a reservoir for the water, which also housed a pinholder. You could display really tall flowers, such as lilies, or irises, or freesias on the pins, and make the most impressive floral arrangements! Flowers lasted longer, the water didn’t get smelly – they really were fabulous.

In fact, why don’t I just grab the lilies Mark got me at the weekend and show you how they work!

I begin with the tallest stem 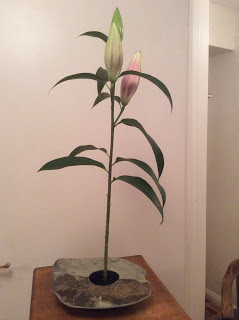 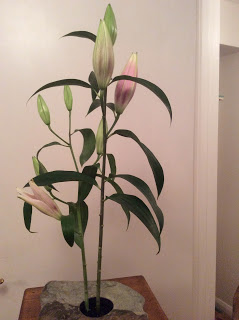 so that you get a veritable cascade of blooms 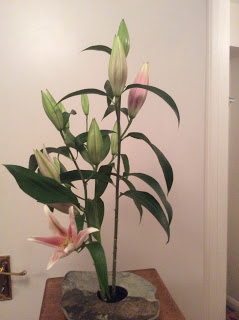 which will last an absolute age.
This arrangement will keep at least 2 weeks,
as  long as I remember to add some water every couple of days. 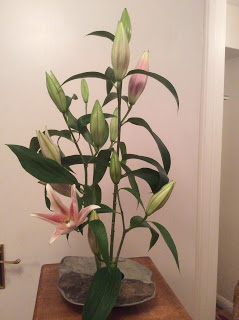 In fact the only reason we stopped making them was because we had to leave the old farm we lived in, and we just don’t have the place to make them any more. Maybe you have even seen them at an exhibition! My parents and my brother started making them, too. We would help each other. Then Dave came on board, and he also made great vases.
I used to love the outdoor marquee shows: Penshurst, Stonor, The Royal Highland, Stoneleigh, Shrewsbury – the showlist was extensive. We received several prizes for Best Stand in Show. I used to pride myself in our floral display and P for Presentation.

The Original Slate Vase Company, we called ourselves.

We used to work with different slate from different regions. 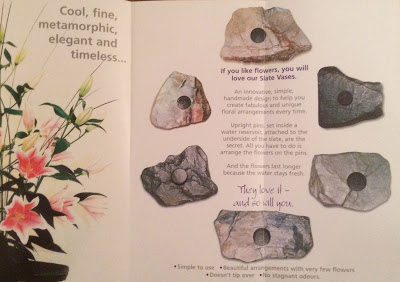 They were very labour intensive. A lot of drilling, grinding, sanding, waxing, polishing, glueing, painting. I remember always washing the blanks as we called them, ready for waxing, before the pots went on. I would prop them up all over the Aga, to make them dry more quickly. Cor blimey! Those were the days. And do you know what? We couldn’t make them fast enough. We sold every single one we ever made, except for a couple I still have, to remember them by.
To be honest, I was really sad to stop production. But the Claritystamp business had gone through the roof, and we weren’t getting any younger. Carting hundreds of heavy slate vases around was pretty gruelling! I think you have to know when to call it a day.
I enjoyed the many years of floral display and floral art demonstrations. It was so different to the stamp world. I also met some very special people in that artisan world; some real characters.  Even now, when we do the NEC, I have more friends over in the finished Arts & Crafts hall than I will ever have on the Stamps & Stencils side!
I used to love doing Stonor August Bank Holiday. I have such great memories of camping with good people, sharing and helping each other. And when Penshurst came round, which was round the corner from the farm, good friends would come and stay with us, and we would open our home to them.  A very far cry from the highly competitive, cut and thrust craft industry I am in nowadays.
My favourite show of the year was the Royal Highland at Ingleston/Edinburgh. I used to try and sell out by Sunday lunchtime, so that I could go and watch the Animal parade. It was the highlight of the year for me. 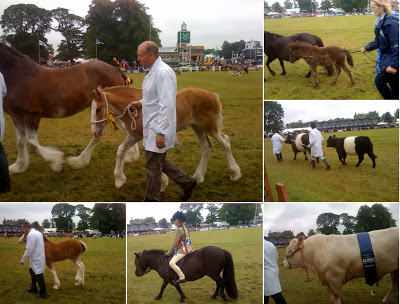 The point of today’s blog, I think, is that we can’t always instantly generate enough income from our dream, but this doesn’t mean failure; it simply requires one to diversify.

71 thoughts on “It’s Tuesday, and it’s P for Presentation”