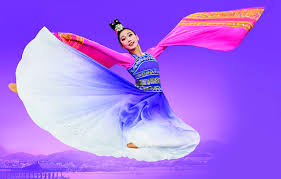 Thanks for popping in. Had a day off today. Took a quick trip to China and back with my parents. It was epic! Quite a long way to go for a couple of hours, but well worth it. Such lovely people!

Did I say we went to China? Well, not quite. We went to Wo King, to see Shen Yun. If you haven’t heard of it, Wo King, it’s near Guildford off the M25.

Shen Yun? Now THAT’S a heavenly thing right there. It’s a Performing Dance group from China. Nope. That’s not true either. They are a wonderfully talented troup of mostly Chinese dancers who aren’t actually allowed to perform in China, because apparently they represent a threat to the Communist government. So we went along instead, to show our support, and be absolutely bewitched for 2 hours.

I asked Mum, “do you like it Mum?” Response: “Oh yes! What’s not to like!” In a word, the whole production – from costumes and dance, to the performers and music – BEAUTIFUL. Gentle, elegant, sophisticated – simply BEAUTIFUL.

There was a political message underpinning the performance for sure. How ironic that these young artists are displaying ancient Chinese culture, dance and tradition at its very best, at its core – and yet they are banned from being in China. What a damning indictment of the controlling regime.

Here’s a trailer, for you to enjoy…

I think it was the raw talent, the totally human skills which hit me most. No wizardry (although there is a very very clever backdrop screen, which kind of integrates onto the stage). Everything was created by humans: the costumes, the music (full live orchestra) , the dancers. You sit and watch, and you realise just how incredibly capable and brilliant human beings can be. The timing, the control, the balance – honestly – you just have to experience it to appreciate it.

Mum, Dad, Dave and I were all blown away by the sheer talent and beauty. Dad said the dancers were perfect. That was his word.

Look them up if you are intrigued. I just read an article in the Guardian which is very interesting – pretty unnerving Here is the link. It’s a long read – but a serious eye opener.