Hi there.
Thanks for popping in.

Today I want to take you to London,
to discover a precious jewel hidden in the heart of London.
Sir John Soane’s Museum is located at Lincoln’s Inn Fields.
It’s just round the corner from Holborn Undergound.
Our Jim at work recommended we visit it when next in the city.
So on Wednesday, after our business meeting, we hopped on the tube at Marylebone, and were there in no time.
The London Underground really is something monumental too, isn’t it? I do love a bit of trivia…
Did you know that there are a staggering 270 stations on the London Underground?

During the 3-hour morning peak, the busiest tube is Waterloo,
with around 57,000 people entering.

Every week, Underground escalators travel the equivalent distance of going round the world twice.
Mind you, you do meet some strange people, don’t you…

There was an American geezer sitting opposite us on Wednesday,
who was definitely strung out on something stronger than
coffee! He was so impatient!
Kept complaining loudly about the train being still as slow as back
in the Victorian age, (like he would know – punk)
about how Japanese trains were like bullets, (whatever).
Every station we pulled into, he would groan,
5 more stops, 4 more stops, 3 more stops.
When we stood up to get off, I smiled at him,
“2 more stops”.
He wasn’t amused.

But I digress.
Sir John Soane’s Museum.
Wow.
When you stand outside, you see a building like many others in that row.

But when you step inside, it’s like passing through a stargate, like being transported into another world. 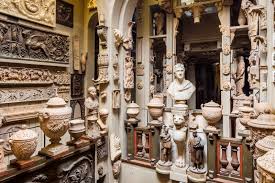 one treasure chest after another,
packed with artefacts, books, statues, art. 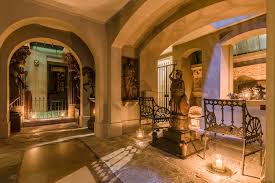 Sir John was an architect, and a very great one by all accounts.
His father was a bricklayer, would you believe?
If you are interested, here’s a link to his life. Fascinating.
His Life
(1753 – 1837)

Soane’s greatest work was The Bank of England,
but the house at Lincoln’s Inn Fields (which is/was actually 2/3 houses) is now a national centre for the study of architecture.

The number of art works and architectural artefacts in this little museum will blow your mind. And when you consider that he collected it ALL during his lifetime, THAT is crazy.
Especially since he was a very prolific architect too!
But what’s more, he had a law passed which stipulated that his home would become a museum of the State, provided it stayed EXACTLY as he left it at the time of his death in 1837

There is a particularly special room: the Picture Room.

Small room.
But on closer inspection,
you notice brackets and hinges on the wall…

Then you realise that there are layers of walls, which fold open to reveal yet more beautiful original artwork.

There was one series of paintings by William Hogarth, which depicted A Rake’s Progress.

Quite the Morality Tale I’d say.

In a nutshell: Had it all. Lost it all.

Anyway, I just wanted to open the front door for you,
just as Jim did for us,
and point you in the direction of the museum,
should you ever be in London.